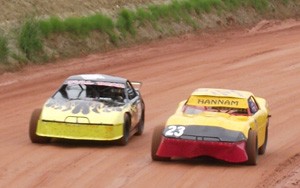 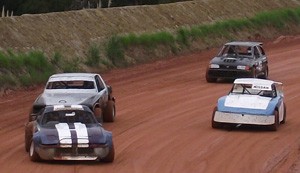 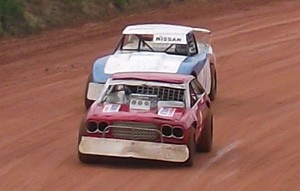 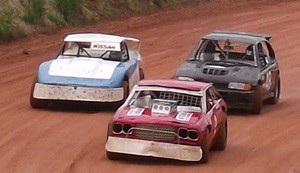 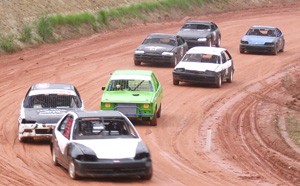 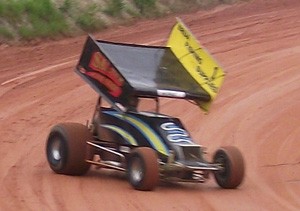 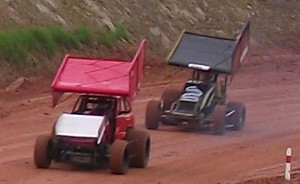 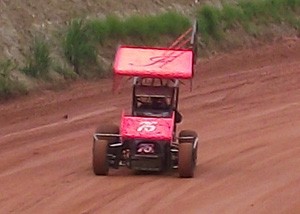 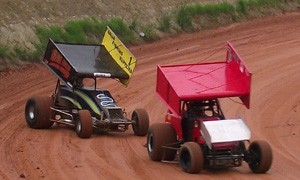 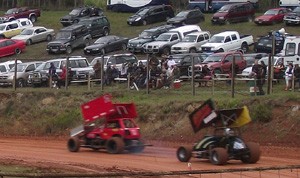 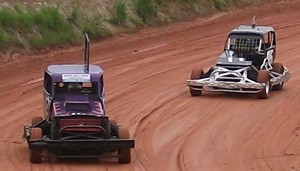 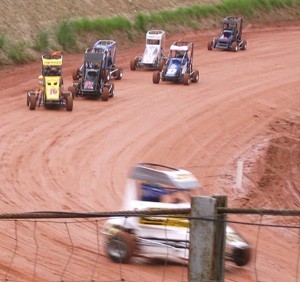 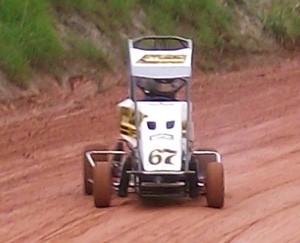 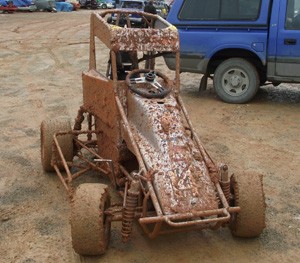 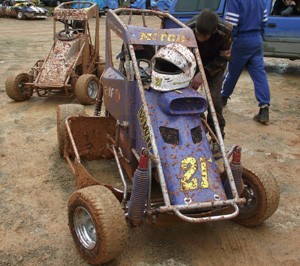 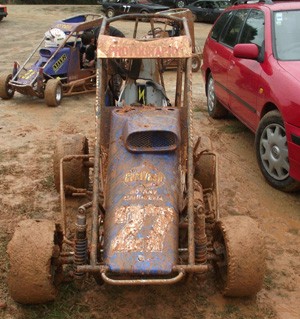 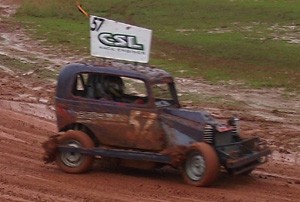 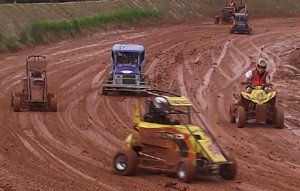 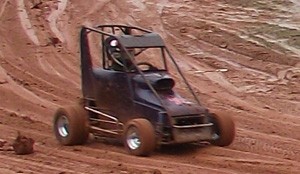 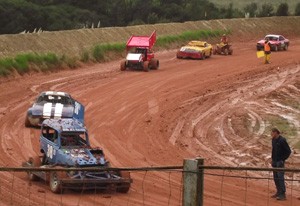 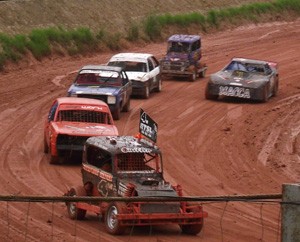 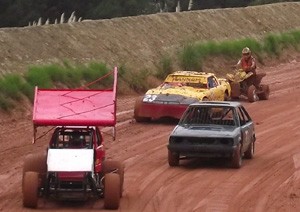 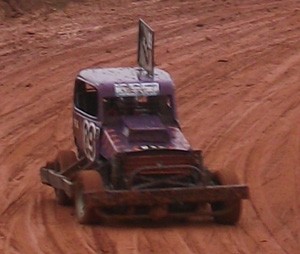 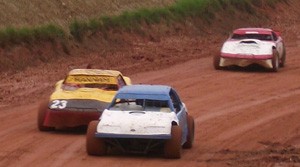 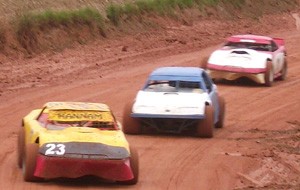 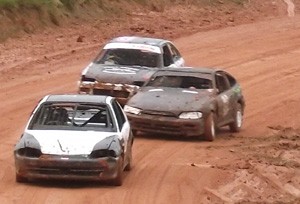 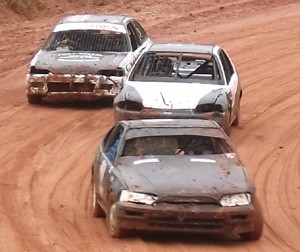 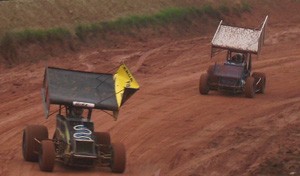 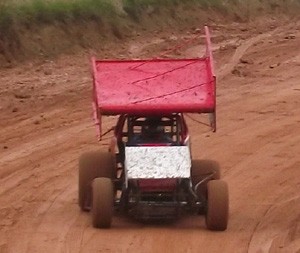 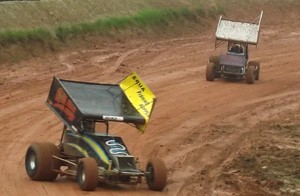 With the track a little soft from the preceding week of rain, Taipa’s track committee, headed by Pip Jecentho brought the surface to good racing condition early for the first day of Taipa’s Queens Birthday meet.

Debbie Wilson who has, in recent times has been racing in Ladies Limited Saloons, brought out a newly  purchased DeWaal Honda Civic for the first time in Ladies C Grade.  A battle with Wendy Scott’s Honda was on the cards and the girls did not disappoint.  Scott winning the first round.

A good field of Mens B Grade Saloons turned out.  Dave Clements secured the first win with Pip Jecentho following him across the line.  Golden Oldies Stockcars arrived to have a play on Taipa’s clay.  Mike Nowell and Murray Jackson led the field home ahead of local, Rob Anderson.

Mens Minisprint and Mens Modified gave the spectators their first look at these visiting race grades.  Ron Drake’s winged Modified flew home at the front of the field.

A regular New Year and Queens Birthday visiting racer, Chanelle Gordon, powered her Ladies Stockcar through the field to win her first race, with Merie Perry and Kerry Galloway taking the other podium spots.

Mens Supers were the highlight of the first day’s racing.  While Max Andresen and Geordie Inglis were out in front, the pack behind were squabbling for third place.  Shane McInteer ( Macca) and Shane Hicks were swapping positions and just as Hicks nosed ahead of Macca, coming out of turn three, Hicks got it a little sideways.  Macca and Hicks collided just as Scott Landsdown arrived to join in.  The three car pile-up sorted themselves out, and with no major damage, all three cars were able to continue racing.  Hicks was relegated to the tail end of the field for causing the accident.  Landsdown and Macca then chased hard to catch Inglis, but Macca going wide on the last turn allowed Landsdown through for the third place.

Quarter Midget drivers, Breyton Davison, Ryan Barry, and Hayden Guptal led the field across the line just as rain showers began to roll over the track.  Racing was suspended until the following day.

An early start on Sunday was achieved by the track committee but the outside of the track was wet and slippery.  Mens Production Saloons were first up.  Paul Joyce held the inside racing line to hold out Bruce Mallindine for the win.

Mens C Grade followed and Kaikohe racers had the luck.  Scott Wilson led Steve Hannon and Errol Sturmfels across the line.  Ladies Supers and Ladies winged Modifieds and Sprintcars then had their racing.  Shevana Williams, Shirley Andresen, Sue Morris, and Sarah Drake came through without mishap.

Debbie Taylor’s Super Production joined Ladies Production grade and led the field to the finish.  Carole Teixeira in the Mallindine Skyline followed Taylor to the line, ahead of Alicia McPhail and Shirley Andresen.

Men’s Stockcars had many muddy mix-ups by the end of their race, with cars being pushed and spun into the wet and soft patches around the track.  Visitors Michael Harris, Hayden Cossey, and Ben Scott came through for the placings.

Debbie Wilson and Wendy Scott fought hard in the second Ladies C Grade race.  Wilson emerged the victor in this round with Scott.

Ministocks were up next.  Aiden Eustace, Caitlyn Haywood, and Troy Power repeated their top three performance from the first day.

Mens B Grade’s second race was not a good one for Dave Clements.  Pip Jecentho secured the win with visitors Blair Woollen and Ralph Olesen second and third.

Dave Seymour, Michael Harris and Mike Nowell pushed their Golden Oldies Stockcars through the mud in their second race for the weekend.  Seymour emerged the victor.

Mens Sprintcars and Modifieds completed their race as the weather closed in again.  Paul Delautour’s Sprintcar finishing in front of Rob Corscadden and Ron Drake.

Showery rain brought the proceedings to a halt for the second day.  The weekend’s uncompleted races, with their sponsorship, will be run at Taipa’s New Year two day meet.  Photos and results of this meet and others during the season can be found on the club’s website www.freewebs.com/taipastockandsalooncarclub

Taipa Stock and Saloon Car Club gratefully thank the huge support and sponsorship from the people and businesses of the Far North, and is looking forward to hosting the 20th Annual Queen’s Birthday meeting next year.

The Club is now gearing up for the End-of-Season prize giving which will be held on Saturday 3 July from 6pm at The Park Top 10 90 Mile Beach, West Coast Road, Waipapakauri.  The Club’s AGM will be held 1pm Sunday 15 August at Taipa Marae.